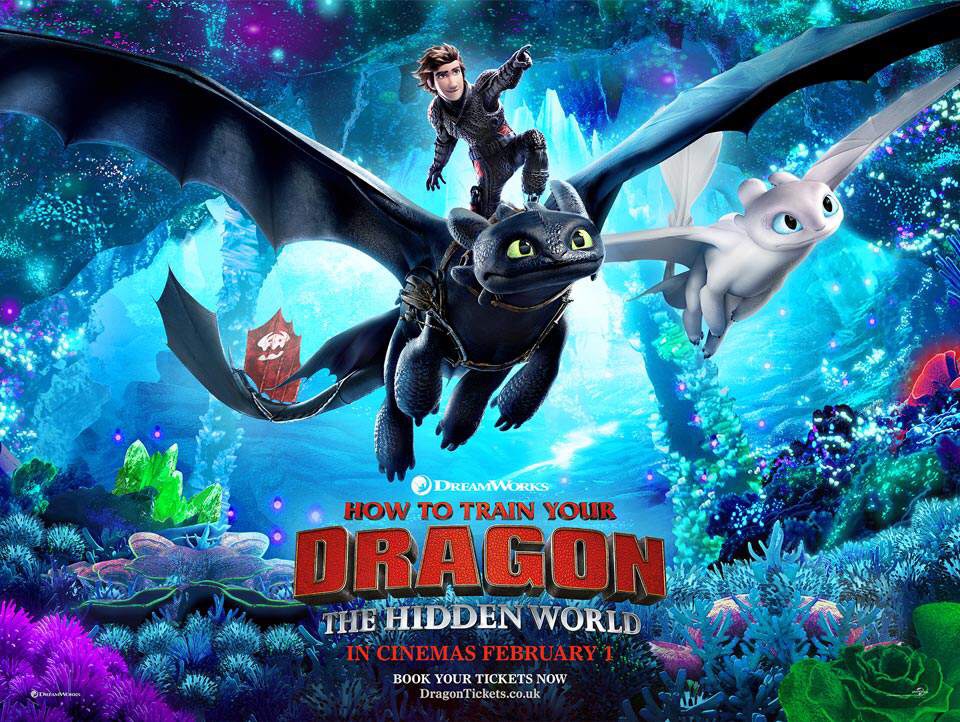 How To Train Your Dragon: A Hidden World Movie Review. Yes, I Saw It Twenty Days Early. Warning! Spoilers!

The How to Train Your Dragon trilogy has been going on for a while now. It was in 2010 where we laid our eyes on Berk, the Viking island. Although the Vikings have changed since the first movie, from dragon killers to dragon riders, the Vikings history has always included dragons. We’ve watched Hiccup evolved from a scrawny kid, to a guy with a sword that catches on fire, and now he’s a true chieftain.

I’ve enjoyed the How to Train Your Dragon trilogy. All the movies have pleased me, and I’ve realized that these are my favorite movies by Dream Works. These movies have something that no other Dream Works movie has had: the ability to keep the audience excited and yet not use the stereotypical kid movie dialogue.

I’ve enjoyed these movies for a long time, and I’m glad that there’s a third movie to this series. And I’m glad to say, that the movie was awesome.

Before we go too much further, I would like to say that there are SPOILERS!
This movie is suppose to be released February 22, 2019. I got special access and was able to watch it February 2, 2019.

Did I like this movie? Uh, yeah!!! How to Train Your Dragon 3 was by far the most hilarious and well animated movie out of all three. The gorgeousness of this movie cannot be denied. I give Dream Works all the credit in the world, for one of the most beautiful animated movies I’ve ever seen. It’s definitely the most beautiful Dream Works movie I’ve ever seen.

The beautiful animation of the film isn’t the only good part of it though. There’s a scene where, Toothless and the other light-fury are at the Hidden World and he’s the alpha dragon. You see Hiccup has learned that it’s time for him to move on. This realization has given the show something more than just another villain, but something more than that. Rather than just having a villain who will die at the end of the movie, we have Hiccup and Toothless starting to realize that their lives are diverting.

The villain in this movie, Grimmel, is an interesting character, but not enough to where you really want to get too invested into the character. It isn’t the fact that Grimmel himself isn’t interesting, but it’s the fact that we know he’s going to die. So, we need to invest are selves into something that is going to leave a lasting impression on us. Something that hasn’t been done in the entire trilogy.

Now, this isn’t the fact that Toothless is finding a girlfriend, but the strengthening bond between Hiccup and Toothless. The fact they’re moving away from soul-companions, to best friends.

Letting the dragons go into hiding, so that one day they can return is something that is unexpected yet treasured. It’s a fitting way to end the series.

But it was also adorable to watch the little baby night furies fly around. I wish I had a picture to give to y’all, but sadly I don’t. Like I said, the movie isn’t going to be released until the 22nd of February.

My Thoughts On The Trilogy

The trilogy, as I said before, is my favorite Dream Works series I’ve ever seen. It’s creativeness and continual ability to make the series exciting is great. It’s hard to make every movie good, in a trilogy. The Star Wars prequels are proof that trilogies can fail, but a series such as the Lord of The Rings, can show that every movie in the series is amazing.

The How to Train Your Dragon trilogy is one out of few that have succeeded in being amazing movies. I’m thrilled to say this because I had my doubts about how this movie would go, but I’m pleased to say it didn’t let me down.

Well, the How to Train Your Dragon trilogy has been a great series. I would buy all three movies in a heartbeat. They’re all great, and I’m glad I got to see this one in theaters. Not on that, but I was given the pleasure to watch it in 3D. This was a great movie to watch in 3D. The movie’s dragons flying threw the air is truly a wonderful sight to watch.

Thank you guys for reading! I loved watching the movie, and I encourage everyone to go watch this movie on February 22. It’s worth the time. Go watch it! Have a good day, People!